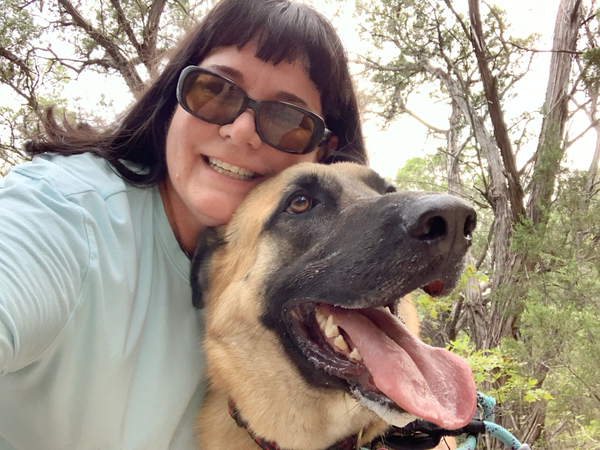 I hit my Covid- 19 live and work-at-home breaking point at the beginning of September. The swimming pools were closed, the days were miserably hot, and all the normal rituals and routines of the end of the summer seemed swept away by the pandemic. I needed a healthy distraction to refocus my mind and find my balance again. While out for a walk with my dogs at Walnut Creek Metro Park near my home in north Austin, I stumbled upon the solution and challenged myself to walk every trail, about 20 miles, of the 293-acre park in eight days. Challenge accepted!

The next day I woke up at the crack of dawn to beat the heat, laced up my walking shoes, slipped the knee brace on my forty-nine year old knee I affectionately call “tricky” and head out to the park with my Belgium Malinois and spirited Corgi. I packed water for the dogs since the creek levels were low and stagnant- not ideal for the dogs to play in or drink.

I didn’t get very far that first day- a short loop along the Pool Lot Trail to the Service Road. Chuck, the Corgi, is athletic and fully capable of turning in the miles; however, walking with him is like walking with a celebrity. Everyone wants to pet him. Admittedly, he is really cute.

Day two - I left Chuck at home and wandered into a part of the park I had never ventured to before. With my Belgium Malinois leading the way I plodded along the trails between Tar Branch and Walnut Creeks. I stopped to take a picture of the old rock wall and a grove of large live oak trees before ambling along the loops of the Point Six Trail area.

That evening I posted some photos from my exploration on social media. That’s when my journey took a dramatic turn. One of my friends, Jenny Cearley Sanders, who lives in east Texas, texted to inform me that her family had operated a farm along Walnut Creek until they sold it to the City of Austin in the 1970s for the purpose of a park. My curiosity was sparked. She told me to contact her grandfather, Allen Cearley, which I promptly did.

My conversation with Mr. Cearley turned out to be a treasure trove of information. The 87-year-old preacher shared he had been born in the family farmhouse that once stood near the present-day park maintenance sheds. His grandfather, James E. Cearley, purchased 400-acers from Wayman Wells in 1854 and he and his wife raised their twelve children on the farm.

I opted not to walk on the days when the heat index hovered around 110 degrees. I used the time to dig into the research and plan my routes based on the information Mr. Cearley shared.

One of the stories he recounted came from his Aunt Ruth. During the 1870s the remaining Native Americans were being rounded up in Texas and removed to reservations. James Cearley heard voices down near Walnut Creek and rode out to investigate. A handful of U.S. Army soldiers were trying to pull their starving captives out of the pecan trees. James suggested the soldiers set up camp to feed the band of mostly women and children. The soldiers wanted to press on. James would have none-of-it and demanded they camp while he and his wife fed the Native Americans and the troops. The encampment was located near the present-day power station.

Day three- I ventured down the Pool Lot Trail to the main Walnut Creek crossing, along Shady Springs Trail, up the Hill of Despair, through the Tangle of Trails Loops, to the Power Line Trail. I stopped to look over the fence at the power station to pay respects to the Tonkawa who once camped there. Central Texas was home to the Tonkawa until Comanches and Europeans drove them out.

Day four- I explored deep into the dogs-on-leash area along the Outer Loop Trail to the endless mountain bike trails of the Log Loops, across the Detention Dam, to the Waterfall Crossing and home along a trail I thought was Shady Springs but turned out to be Endo Valley. It is easy to get lost with so many social trails splintering off into the woods. As I walked, I thought about Mr. Cearley and his brothers hunting and fishing along the creeks and limestone hills. In our conversation he mentioned there were very few trees on the tops of the hills where the cattle grazed. He also included that most of the Ashe juniper dominated forest of today came after the grazing animals were removed.

Day five- According to the City of Austin archeological study conducted in the 1980s and Mr. Cearley there was an old Spanish road that crossed the matrix of creeks near the Tar Branch. Spanish missionaries, Anglo pioneers, and later Texan travelers would stop along the creek to grease their wagon wheels with the tar like substance (asphaltum) that seeped forth from the banks of the creek. During the 1920s a wildcatter named J. D. Mays drilled for oil along the Tar Branch just west of the park - oil was never discovered. I also never discovered the tar seep even though I explored all along the Tar Branch and Shady Springs Trails. I’m not sure I wanted to let my dog near a tar seep anyway.

Day six- I was limited on time, so I picked the Windy Loops, which cut close to North Lamar. I had asked Mr. Cearley to describe his memory of Lamar (the old Dallas- Austin Highway). He recalled it was a narrow, two-lane road with little motor courts, a few dance halls and bars, and the Walnut Creek Baptist Church. The church, located just south of the park, is the oldest continuously operating one in Travis County. Founded by the Cearley’s and other local families in 1856, it is reported that the outlaw Sam Bass stashed some of his stolen loot in the church walls. The thick walls of the original structure were made of large pine timbers from Bastrop and local limestone rock.

Day seven- Having wandered along most of the trails south of the pool parking lot, I journeyed north to check out the BMX trails. Because of the number of cyclists on this section of trail, I left my dogs at home. The endless loops flow next to the Thein Hau Temple which now occupies the grounds of the old Coxville Zoo. Mr. Cearley worked at the zoo when he was in high school and remembers it fondly- he shared that he liked the monkeys the best. The zoo sprawled out over several acres with a menagerie of animals and was part of the Cox Filling Station, established in 1939. Additionally, there was a motor court and swimming hole that cost a $1.00 to swim in. Under pressure from the Human Society and the City of Austin, the zoo closed in the 1970s.

Day eight- I needed one more day to check off the Sever Consequences Loops. With that last section completed, I added up my daily totals and had explored 22.3 miles in eight days. In order to get to all the trails, I had to cross several tracks more than once as I started all my adventures from the parking area near the swimming pool and sports fields.

Most importantly I learned about the history and heritage of the land and the people who have lived here way before I showed up. Covid-19 has been hard on all of us. Being able to explore the nature that is just down the street from my home has been a bright spot during these anxious times. I’m grateful the City of Austin purchased the land from the Cearley family in the 1970s and slowly turned it into one of the crown jewels of the park system. What I also learned on my journey is – we need more parks to accommodate our growing population.