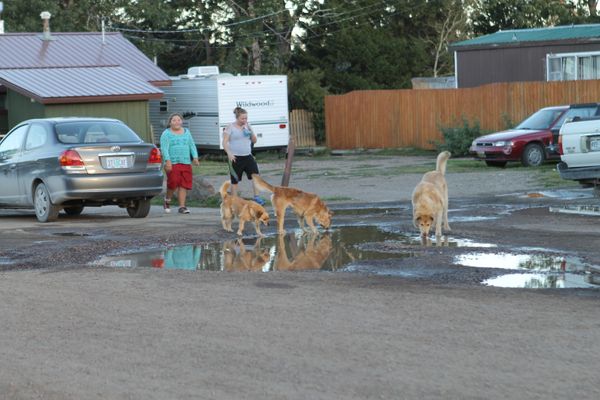 Life at 25 Miles Per Hour

“The reason I pulled you over today mam is because you were going 38 miles per hour on a 25 mile per hour road,” stated the kind, nice looking police officer that pulled me over in Whitefish, MT. (I did not get a ticket- thankfully)

Montana has a reputation that people can drive as fast as they want, anywhere they want. That might be true as long as their desired speed is 25 miles per hour or less. Some roads post a speed limit of 45, or even 70, but that’s only meant for a few days in August when the driving conditions are perfect. The rest of the time the weather can slow things to a crawl with; howling winds, fog as thick and white as Santa’s beard, ice, snow, rain, freezing rain, sleet, and my favorite- freezing fog.

I suppose that driving slow along the mountain roads is a good thing. It makes everyone slow down and take notice of the vistas and the amazing nature that the state has to offer. It’s safer for the millions of senior citizens that visit Glacier National Park and the Flathead Valley. And it is a great moneymaker for the municipalities that can afford a nice, handsome, young cop to enforce the traffic laws.

Winter storm in September. I was the last car over the pass.

Even if folks wanted to drive fast there is yet another special Montana feature that can grind even the most skilled speeder to a gruesome halt- potholes. Dirt roads, paved boulevards, gravel driveways- they all suffer the affliction of road acne. Some roads flaunt their potholes and celebrate them with great depth and girth; others hide them under calm pools of muddy water that seem shallow at first, but are in fact great craters. Some roads give warning that they have potholes and support a great amount of washboard before and after each hole; others have smooth pavement that leads right to edge of their abyss. My father, George Bristol, once wrote a humorous poem called Potholes in Paradise to share his love of the Montana speed bumps. They are notorious.

Wildlife is another hazard. Unlike Texas, most of the wild animals in Montana are large and can cause serious damage to your car if you hit one even at 25 miles per hour. And on the Indian Reservations, all livestock and house hold pets are free roaming- even on the highways. The good news is, if you are driving slow, you don’t have to slam on the breaks to get a good photo of a bear feeding on the side of the road; instead you can just ease off the pavement or stop in the middle of the road to take the picture.

Life at 25 miles per hour also means, being late is okay. No one will believe you if you tell them you hit traffic on the way to an appointment, but they will believe and forgive you if you tell them you had to slow it down because of the new potholes. Somehow going slow in the land of glaciers seems natural and warranted. Its maybe what we should be doing all the time instead of racing around trapped in our own time driven frenzy. So while in Montana, I will do as the Montanans do and drive 25 and drink in the beauty of nature.