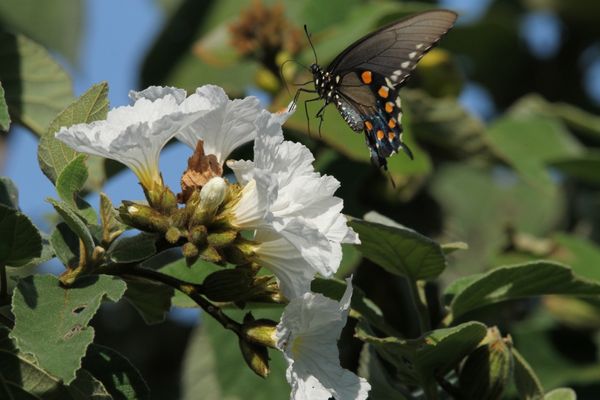 The fall migration starts in August for the birds with waves of Purple Martins, swallows, and song birds passing through. September we see an influx of hummingbirds; both the Ruby-throated and Black-chinned pass through Central Texas on their way to Central and South America. The bats head south in September and October after spending their spring and summer under the Ann Richard's Memorial Bridge over Lady Bird Lake and north in Round Rock along I-35 or in caves in the hill country.

October normally ushers in waves of various butterflies and moths, and that is true for this year as well. What was special about this year is we were treated to an unusually large explosion of American Snout Butterflies. I'm not a butterfly expert by any account; however, I do enjoy learning about the nature that surrounds us. According to the website Texas Entomology by Mike Quinn, "Mass movement of snout butterflies are spectacular for their density, duration and geographical extent. Periodic snout outbreaks are one of the most phenomimal reoccurring south Texas entomological events. In late September of 1921 an estimated 6 billion butterflies passed over a 250 mile front over 18 days."

The American Snouts lay their eggs on Hackberry trees- Spiny Hackberries are their favorite. As young leafs bud out the larva feeds on them with a high success rate for reaching adulthood. While at Choke Canyon State Park on October 9 -11, I experienced millions of these butterflies filling the air as they fluttered south on their journey. Days before going to South Texas, I noticed the butterflies increasing in their norther range around Austin. I felt guilty for striking so many with my car as I drove the backroads to South Texas from Austin. While the bulk of the mass migration is over, several will remain in the area for the next few weeks.

Other October pollinators that pass through at this time are the Sulphur and Red Admiral Butterflies, Pipevine Swallowtails and other swallow tails and of course the star of the butterfly / moth migration the Monarch Butterfly. The Monarch populations have greatly diminished in the past few decades due to the use of harmful agricultural and home use pesticides and weed killers such as Round-up. Habitat loss and an increase of extreme weather also play a major roll in the reduction of these iconic butterflies. You can help these lovely creatures by planting native plants that flower in April and October. Lantana, Turk's Cap, Golden Eye Daisies and Frost Weed are some of the fall favorites of all passing butterflies and moths and local honey bees. The Queen Butterfly is also a orange and black butterfly that looks much like the Monarch and passes through at the same time as the Monarchs. Queens love the native blue mist flowers. For more about Monarchs check out my blog post Memories of Monarch Butterflies.

In November we should see the return of certain small birds that winter in central Texas such as: Cedar Waxwings, Yellow-crowned Warblers, Yellow-rump Warblers, Ruby-crowned Kinglets, and American Goldfinches. These birds don't often come to feeders unless you have a mix that includes berries. However, they all need water and will come to bird baths frequently. Having a good mix of native plants and trees will also increase your chances of seeing these wintering birds. For more about places to see birds and learn about birds check out my new book, Parking Lot Birding: A Fun Guide to Discovering Birds in Texas.

I hope you have a safe and healthy fall and will take the time to go outside and notice the nature that surrounds us each and everyday. We do not have the dramatic seasons of the norther states, however, we are front and center for some of the best bird, bat, and butterfly migration in the country. For additional information about butterflies and moths see my earlier post Nature Near Me.