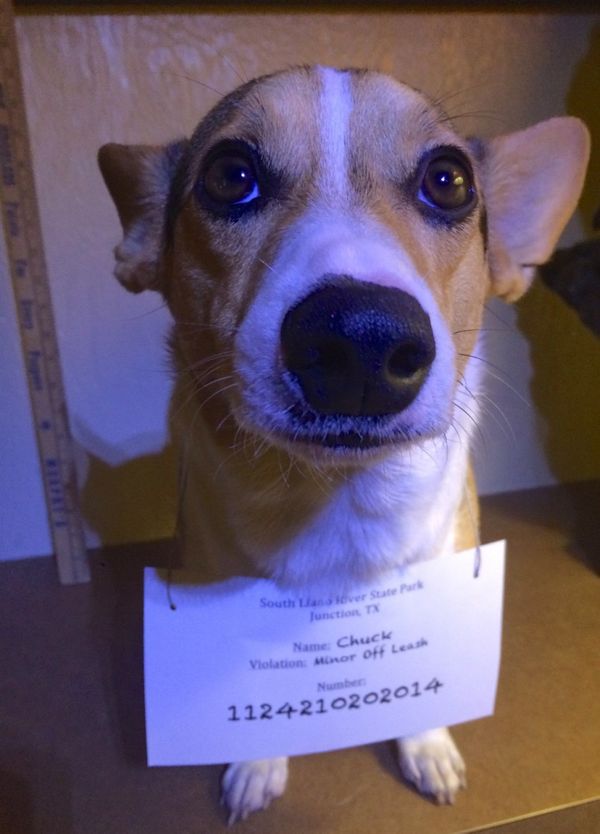 Perhaps the signs were right there in front of us the entire time. From an early age it was clear that Chuck simply was not an outdoor dog. He preferred luxury and comfort, and enjoyed the fast, hard city life. He filled his days with lounging and his nights with fancy swirled drinks and belly rubs.

Chuck on the town

City life for a dog only 13 inches from floor to shoulder can be rough. He recruited security, and trained with dogs ten times his size.

Then the signs really started showing up and patterns of reckless behavior increased. He started sleeping on the furniture, shredded stuffed toys, stole socks and underwear from the laundry, and on more than one occasion stalked and killed a bug. The cruel world of nature dealt him one last final blow when he was stung in the nose by a bee. This rejection from nature thrust him only deeper into the sinister indoor and urban world.

Chuck- rushed to the vet after bee sting

Determined to be an indoor high roller, he flew with his people to Minneapolis and demanded breakfast in bed at the Eden Prairie Marriott. Soon after the trip to Minneapolis he started dressing in questionable outfits with sculls and crossed doggy bones. The other dogs found it disturbing.

Chuck on the edge

This fall, we decided it was time for an intervention. We took Chuck on a family campout to try to break the cycle of sleeping on the sofa, lounging on the chair in the back yard and demanding endless belly rubs. But camping proved too much, and Chuck snapped. In a daring attempt to align himself with another pampered pooch from the ritzy RV side of the park, he escaped his harness for a full 15 seconds and made a run for it. Park police were called in, a two hour investigation ensued, and without a mention of voluntary compliance to the leash laws, Chuck was made into a known criminal in Kimble County Texas.

The intervention was a bust. Chuck was grounded from sleeping on the furniture for a week and was subjected to rigorous walks in the neighborhood. It will be a long road to rehabilitation. I am proud to report he is 20 days clean from escaping his harness. But he did growl at the rain this week.